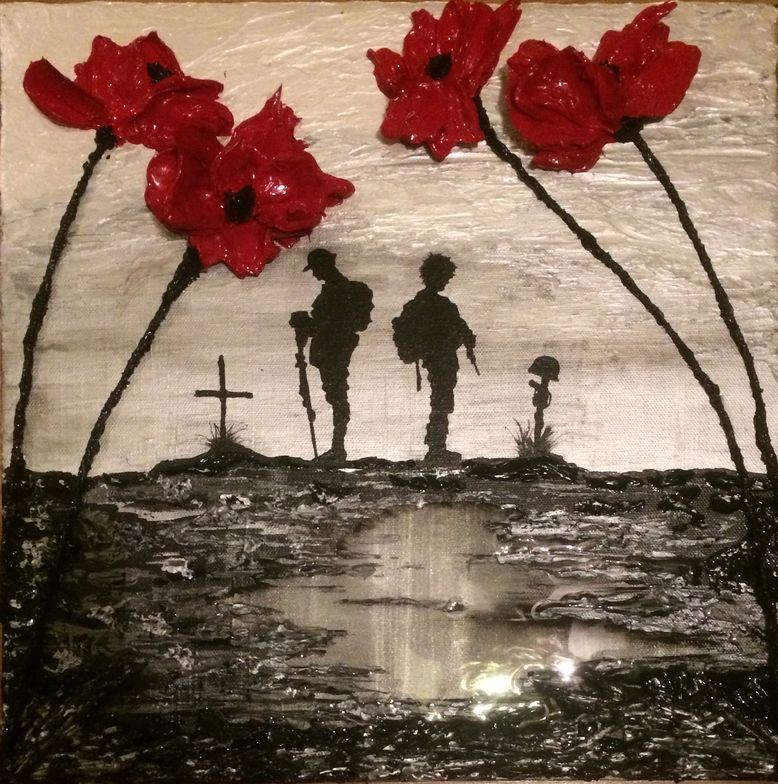 We are about to worship on Remembrance Sunday anticipating Remembrance Day on November 11th which marks 103 years since the armistice was signed ending World War I.   One would have hoped that Remembrance Day would be just that – a day of remembrance of long ago wars.  But, alas, there are 15 full fledged wars happening at the present time and about another 25 armed conflicts worldwide.

Let me share with you a portion of a reflection by The Very Reverend Michael Sadgrove.  He is right in saying that our world today is as precarious as it has ever been, with political instability in many parts of our world and with the continued proliferation of arsenals of powerfully destructive weapons.  In considering the fact of war and its impact upon the world it may seem all so large in scope.  We look back to 1914 and 1939 and the other conflicts of our age – lesser maybe in scale, but not lesser to those who were its victims.  How do we begin to take it all in?  Reverend  Sadgrove recalls his time in Russia, in what was once Stalingrad (now Volgograd).  He writes,

“There is a vast war memorial there, a colossal sculpture….that dominates the skyline for miles around.   The eternal flame that burns beneath it, the perpetual guard that is kept there – the need never to forget is everywhere.  Yet the hugeness of it didn’t move me as much as something I saw in the museum dedicated to the terrible battle of Stalingrad of 1942/43, a helmet that had lain frozen for months alongside the body of its owner in that terrible winter; a sweetheart’s letter that was the last thing a dying soldier pressed to his face as he bled in the snow; a battered frozen tin mug; a torn photograph of a mother and father who were not to know they would never see their son again.  It spoke of unbearable sadness, of the tears in things.”

For Rev. Sadgrove this put a human face on war, because the huge was brought down to the level of individuals.  In talking about the slaughter of millions one’s mind seizes up, but talk about the suffering and dying and the bereavement of individual persons with names and homes and loved ones, and we begin to have a sense of the true horror of war.

Our Remembrance Day ceremonies and traditions are a way of holding and handing on raw memories and stories of pride and shame, bravery and cowardice, outrage and fear, comradeship and sacrifice, sadness and grief.   We find our own meanings in them.  We think our own thoughts and pray our own prayers during the two minute silence.  For instance, I think of my grandfather, a prisoner of war during World War 1 sharing a photo of his daughter, my mother, with a German guard; my father landing on the shores of Normandy as machine gun bullets ripped through his comrades all around him as they waded through ocean water toward shore; my stepfather who served in Canada’s navy in the second world war; my cousin, who happened to have been born and raised in the United States, and thus ended up serving in the United States’ armed forces and was killed in Viet Nam. And I pray during that silence, I pray that their efforts were not in vain, that somehow their sacrifices are part of the larger story of God’s leading us to a time when swords will, indeed, be turned into plough shares, when peace and kindness will be the norm for our world.

What does Christianity have to say about all this? Well, as Rev. Sadgrove reminds us, every Sunday is remembrance Sunday, for every Sunday we remember the life of one who died, and once a month we remember his dying and his death. “Do this in remembrance of me.”  It is individual and specific: one man’s pain and darkness; one man’s broken body and shed blood; one man’s mother and best friend looking on in grief as his life ebbed away on a cross.

“Long years ago, as earth lay dark and still

Rose a loud cry upon a lonely hill

While in the frailty of our human clay

These words from a hymn from the Great War comes straight out of the struggle to make sense of the new experience of mechanized warfare and death on a scale never known before.  It is moving because it interprets those deaths in the light of the death of Jesus. Again in the words of Sadgrove, “It asks God to look down on our lesser Calvaries where God suffers in every human soul, each one cherished by God, each death mattering to God, or might we say diminishing God as it diminishes us. The cross ties our human suffering to God’s for eternity.  We remember.  God remembers.

A rabbi was asked whether a garment that had been symbolically torn in grief could be sown up and used again.  “Yes,” he replied, “but you mustn’t disguise the tear. The scar must always show.”  In other words we always carry our memories around with us.  Time gives a perspective from which meanings can become clearer, the picture comes into focus.  However, we must learn in the ceremonies of remembrance not to make it better by easy speeches that gloss over the particularities of suffering, loss, and grief with the language of willing self-offering and the glorious dead.

The experience of wondering where God is, the outrage at a God who does not come to rescue us is familiar to human experience.  And the resurrection, especially in the gospel of Mark’s short ending, does not make it “all right.”  At least, not yet.  We glimpse a future that could be different, will be different according to our Christian hope.  In the Sacrament of Holy Communion we ‘remember forward’ to what will one day dawn, that other country whose ways are gentleness, and all her paths are peace.  It seems as far away as ever for now.  Our world is not in a good place as we mark yet again another Remembrance Day.  All the more reason, then, to make sure remembrance leads us into prayer for the future of humanity.  And into reflection, so that we ask ourselves what we have learned from the past and how we intend to act on it.  Memory, prayer, wisdom, and resolve are the antidote to despair.  These are among the things that will make for ‘good remembrance’.

Blessings to you all as you remember, as you pray, and as you reflect.