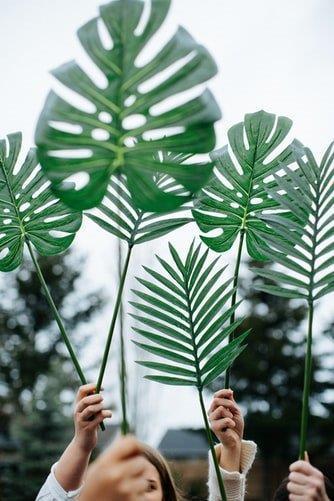 According to the gospels, Holy Week, which begins this Sunday, starts out with a parade – But there will be no parades this year! Social distancing prevents such activity. In today’s upside-down reality, we show how much we care by keeping away from people.

Back on the first Palm Sunday, however, there was a parade. In fact, there were two! In their book:  The Last Week, New Testament scholars John Dominic Crossan and Marcus Borg, point out that the parade that heralded Jesus’ entry into Jerusalem wasn’t the largest or most spectacular parade in town during that particular Passover season.

Back then, Jerusalem was a destination hotspot—a tourist town (long before COVID-19). The city’s population swelled from 40,000 to 200,000 during the holidays and Passover was one of the busiest holidays. One parade at that time, we know well. Jesus of Nazareth riding on a donkey, greeted with palm branches and shouts of “Hosanna!”

Entering Jerusalem at Passover also was the Roman governor Pontius Pilate. Pilate lived some distance away in Caesarea by the sea. With crowds of excited Jews flowing into Jerusalem to commemorate their liberation from Egypt, the Roman Governors would put on a display of force, to deter the Jews from thinking they could be liberated from Rome, also.  In a show of military force, this second parade included, “cavalry on horses, foot soldiers, leather armor, helmets, weapons, banners, golden eagles mounted on poles, sun glinting on metal and gold.” It would have had a sobering effect. Quite a contrast to the Nazarene riding a humble donkey in peace, much as had been foretold by Zechariah.

So, what are we 21st century Christians to do with the Palm Sunday? No matter how you look at it, here we are offered a choice between two parades. The attraction of the power and the might of Pilate’s military parade with all its glory and wonder is still there to tempt us and the world.

Actually, the world is full of parades, or “bandwagons.” Some might try to distract us with trivial pursuits, leaving life’s great questions and mysteries unexplored. Others might offer us a life of ease with little thought for our neighbour. Still others invite us to succumb to fear or resentment - with life turning bitter for us and for those around us.

Holy Week reminds us how easily we are distracted and fooled by other parades and promises. As you walk through Holy Week this year, I invite you to turn to the Daily Prayers. Each day, there will be a related scripture, short reflection and prayer.

Pay attention to how Jesus provides a contrast to the others in this drama. In every interaction, note what he does, what he says, what motivates him. In the midst of the suffering and confusion over the COVID-19 crisis in our world today, ponder these questions:   Where do you see the spirit of Christ? What does it mean to be his disciple in these moments?